At some time during the early school years, almost every parent is asked to give permission for his or her child to have a scoliosis exam. Normally, everyone's spine curves slightly to the right or left and may even have vertebrae that manifest a little twisting or rotation. Scoliosis is sideways curving of the spine that often gets started in childhood, when the bones of the spine are still growing.

What is the Cause?

In most cases, the cause of scoliosis is unknown. Only 10-15% of scoliosis cases can be traced to a tumor, infection, cerebral palsy, muscular dystrophy, disc problems or birth deformity. It is thought that scoliosis is the result of a hereditary problem or an adaptation to some type of trauma, such as the birth process, or an injury, such as falling off a bicycle. It usually starts with problems in the neck.  Spinal bones continue to grow well into the early 20s, and if left uncorrected, scoliosis often worsens.  It is detected by uneven shoulder heights, a loss of structural balance, or a change in posture.

Scoliosis isn't a terminal condition, and most people can lead a perfectly normal life without ever knowing they have it. In rare cases, where the scoliosis is more than thirty degrees, there may be impaired respiratory or heart function that's thought to be neurological in origin rather than mechanical.

The orthodox medical approach to scoliosis has undergone some changes. Before 1945, the body was encased in a plaster cast. Then doctors surgically used rods and metal restraints to straighten the spine. Other brace devices followed and then, electrical stimulation therapy became popular. Surgeons were quoted as saying that none of these methods did any good whatsoever. the newest research claims that 95% of all scoliosis patients can be identified by neurological test, indicating the problem originates in the nerve interference, the best answer to the problem of scoliosis is to allow a chiropractor to adjust the vertebrae to correct the nerve interference which has caused or aggravated the condition. 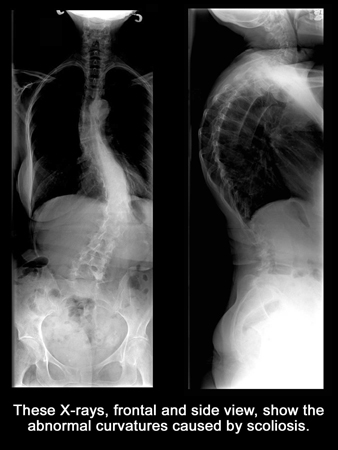 Do you know someone who could benefit from a chiropractic examination?